I had Sarah Jarosz’s “Long Journey” in my head yesterday.

I had one of those tender and tentative afternoons, gradually tiptoeing my back from a night and morning of feeling positively terrible. Before bed, Grace wanted to write a note to her beloved Mr. Hove, the intern teacher in her classroom who is moving on after this term. She is really sad about saying goodbye to him and has been talking about it all week. 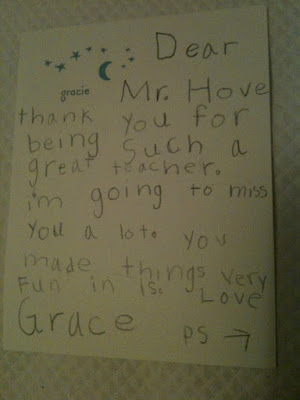 She wrote him the note above. Totally earnestly, she asked me if she could include a dollar in the note. She has eleven dollars saved up, from losing teeth and a couple of other random things, and she sincerely wanted to give him one. She was so sweet, so genuine when she asked this, and I had to stifle a giggle. It was hard to explain why that was probably not the right way to show him how much she appreciated him.

Ultimately we decided she would give him her very favorite Magic Treehouse book. This is a treasured item in her life, and I am impressed at the fact that she gives it away freely. As I tucked her into bed, Grace was noticeably sad.

“Are you okay, Gracie?” I asked

“Yes, I’m just sad tonight.” She didn’t meet my eyes, instead concentrating on her hands as she fiddled with her teddy bear’s ears.

“I am so sad about Mr. Hove leaving.”

“Why do things have to change? I don’t like that. I want them to stay the same.” She shook her head fiercely, pursing her lips and visibly fighting back tears. 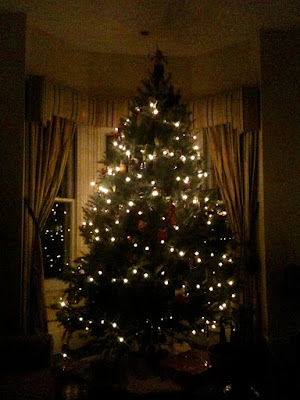 After both children were in bed I went downstairs to the kitchen. I passed through the living room on my way back upstairs, pausing to look at the Christmas tree, lit up and sparkling in the dark room. I felt a wave of emotion wash over me, fear about change, sadness about farewell, a grown up version of the same things Gracie had just elucidated.

I knelt on the floor and rested my elbows on the coffee table, hands folded. This is not a position I have ever found myself in before. Ever. I stared at the tree in the darkness, resting my chin on my hands, feeling an unfamiliar mixture of intense anxiety and deep peace. I closed my eyes and heard my own breathing and felt infinitely big and infinitesimally small at the same time. Again, again, I heard Wordsworth’s familiar lines in my head:

And I have felt
A presence that disturbs me with the joy
Of elevated thoughts; a sense sublime
Of something far more deeply interfused.

I was suddenly, startlingly aware of the presence of something in the room with me. The fragility of the day, my daughter’s sagacious words, the glimmering lights in the near-solstice darkness all combined into a potent cocktail that seeped into my marrow. I feel I am perched on the edge of something big, and new, and scary. Neither those fears nor the desperate, anxious sadness of saying goodbye to a comfortable status quo are new. But what is new is the undeniable current of calm I felt, that sense sublime that throbbed like a bass note under the melodic and deafening descant of my far more verbal and outspoken fears. I don’t know that it will always be there, but it was last night, and I hope it will again.

4 thoughts on “Change, and Christmas lights”