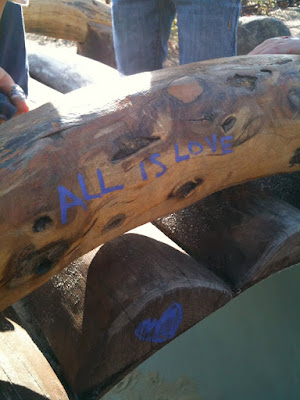 So, as you know, I’ve been pretty preoccupied lately with questions about how we – I! – can be more present in our lives. Once in a while, I have a day where I feel like maybe, just maybe, it’s within my reach, that conscious life. Thursday was such a day. I felt overflowing, at times, with awareness of the abundant beauty in my regular little life. In fact, I had the Weepies’ “All This Beauty” in my head all day long.

I woke up when Whit pushed his little nose into my neck from the side of the bed. He crawled in with me, snuggling up. How much longer will he do this? I am just not ready for children who won’t cuddle. I am not generally a fan of physical contact but this guy? For sure. He pressed his little feet against my legs and breathed his breath that smelled faintly like sweet potatoes into my face. Now this isn’t because he’d been eating actual sweet potatoes, seeing as this child has never eaten so much as a raisin from the fruits-and-vegetables category, but I swear that’s what he smelled like. I whispered in his ear that I loved him and he whispered back, “Mummy, I love you as much as the sky.”

Then I ran out to get coffee and as I was driving back was momentarily struck by the gorgeousness of the pale gray-green rime that covered the field at the park down the street. It shimmered in the morning light, this layer of frost that was so beautiful in part, I’m sure, because I knew as soon as the sun came up it would melt away.

It was a no school day, so the children watched some TV as I folded laundry. For some reason, I found myself charmed by the little boy briefs with dinosaurs and trucks on them. I was also appalled by the tremendous length of my childrens’ pajama bottoms: when did their legs get so long? Such a cliche, but there it is. I heard the “Rainbow Connection” playing on the TV in the family room and felt happy, happy, happy.

Then we went into a local park to meet some friends. As we approached the park, I saw someone I had not expected to see. Grace was mid-story about a squirrel when my friend saw me and shouted hello. “Hi!” I exclaimed, interrupting Grace. She burst into tears. I was able to distract her from the brink of a tantrum with the delights of a playground and, later, those of her friend. But this came back later.

During quiet time, Whit emerged from his room to hand me a large teddy bear. I looked at him, mystified, and he said, “for the goodwill bag, Mummy.” That blew me away, I admit. And then as soon as I got him back in his room, Grace came out (“quiet time” is like an extended game of whack-a-mole, and frankly not altogether quiet). She was crying. “What, Grace?” I asked her. She could barely talk through her tears. This was one upset seven year old. I asked her to sit on my lap in the chair in the living room and I rubbed her back as she calmed down.

“Mummy,” she began, looking right at me with those huge, bottomess brown eyes, “Today at the park? The squirrel? When you said hi to Sally? That really hurt my feelings.”
“I’m sorry, Gracie. Tell me more?”
“Well, sometimes, when you see an adult, and you are excited to see them, you stop listening to me. Sometimes I feel like you are not paying attention to me. And you always tell me interrupting is wrong. But then you do it sometimes?” Her voice wavered and I could tell she was not sure if she was saying something wrong.

And yes, universe, I heard you. Boom. Guess I’m not really as present as I was thinking I was, on that one day. Boom boom neon: pay attention. This is your daughter, Lindsey. And so I did. I looked right back at her and apologized for interrupting. We discussed a better way to handle the situations – because I told her there would be more – when I simply cannot for whatever reason give her my uninterrupted attention for the duration of a story or episode. She gave me a huge hug and thanked me for listening to her.

I understood in a single moment of startling, stunning truth what people mean when they say their children are their teachers. I’m embarassed now to admit I never quite got that before. I do now. My daughter, my teacher. A seven-year-old sage with chipped nail polish and double-tied shoelaces that I can’t untie. A font through which the universe reminds me of that most important thing: be here. Be here now.

And I remembered the graffiti Gracie had shown me at the park that very morning. All Is Love. She asked if this was from Where the Wild Things Are (we listen to the soundtrack in the car a lot, and that’s her favorite song) and I said I didn’t know, but it was a good thing to live by. And, yes it is. Love that reminds us of who we want to be. Love in tears and love in hugs. Love expressed through teddy bears for goodwill and through purple graffiti on a new playground structure. All is love.

5 thoughts on “All is love”