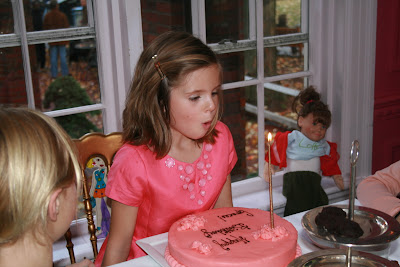 Yesterday was Gracie’s birthday party. 22 six and seven year old girls, each with a favorite doll (in all but one case, an American Girl doll) in tow, had tea. It was surprisingly under control and pleasant.

Today Grace and I spent all day together. This morning she wrote all of her thank you notes in the kitchen while I baked her birthday cake (half chocolate and half yellow, as requested) and also some Halloween cupcakes. 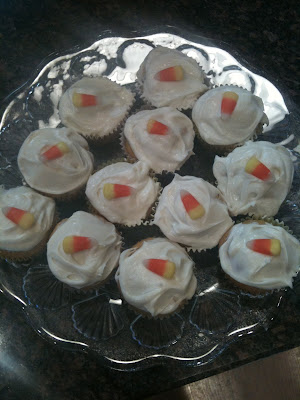 After lunch at home, Grace and I went to our first mother-daughter book club. We read the most wonderful book, The Boy Who Grew Flowers. I really recommend it. Grace read it to me once, and I read it to her once. As we drove into town we talked about what the story was about. Grace was tired, I think, and thoughtful. We talked about difference, and empathy, and the importance of getting to know someone before you decide what you think of them.

The conversation segued into general talk about friendships. She told me two things she had learned in kindergarten that really struck me. The first was that “you should think before you say something” which struck me as a life adage we should all abide by (including me). Then she told me how her kindergarten teacher had said that sometimes you should just keep what you were going to say inside. She made some analogy – twice, trying to explain it to me – about how it is like when you squeeze too much toothpaste onto your toothbrush. She said firmly that you should keep mean things you want to say inside your body rather than saying them. Toothpaste notwithstanding, I think there’s wisdom in that too.

At the book club, Grace was uncharacteristically quiet and reserved. She felt very shy and clung to my leg most of the day. She did not know any of the other girls except for one well, and she was clearly intimidated. At one point, curled on my lap, she whispered in my ear that she “felt like Rink” today. Rink is the shy protagonist of the Boy Who Grew Flowers. Her statement brought tears pricking to my eyes, but I also felt proud of her.

From book club I drove her to a friend’s house to go to a Halloween party. We talked about a sleepover she wants to have. She wants to have a certain friend who has had her over for the night to sleep over. I mentioned a possible date and she was enthusiastic about it and then, abruptly, said she was not sure. I asked her why. She explained that she was embarrassed that she still falls to sleep listening to music, and asked if we could just not play the music that night.

Despite whatever message she took from The Boy Who Grew Flowers, the desire to be the same and to fit it is still overpowering. Oh Gracie girl, on the eve of your seventh birthday, if only I could find a way to show you that the things that make you different are the ingredients of your own personal magic.

1 thought on “A Day With Grace”