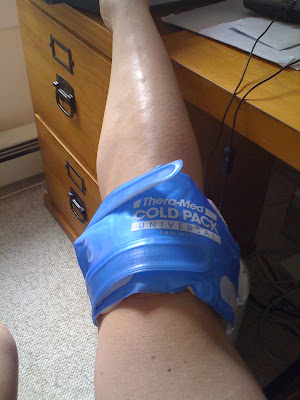 About three weeks ago my right knee started really hurting. In a way very different from the diffuse and roaming joint pain that I’ve had for ages (one day wrist, another day ankle, another day knee). I stopped running and waited. After 10 days it still hurt so I went to see an orthopedic guy that my regular doctor recommended.

That doctor could not have been more dismissive. He told me that I had a “woman problem” (I flashed back to all of the women declared hysterical for centuries – I imagine there are better than even odds that I would have been one of those women back in the day) that had to do with the “Q angle” between hip and knee (was he declaring me wide of hip? I wondered). Anyway, his prescription was ice, aleve, no running, and within two weeks it ought to be feeling much better.

Well, yesterday was day 11 and I was barely able to make up and down the stairs in this house. And seeing as my office is on the 3rd floor and kitchen on the 1st, that’s a big problem. I called him back and spoke to him today. he has suggested a cortisone shot so I am heading in this afternoon to have a huge needle inserted into my knee. Yikes. Am envisioning something terrible and it will likely be a pinprick.

But the whole experience has made me ever more keenly aware of how absolutely terrible I am at sitting still. Resting is just not something I do well. A sentence to do no exercise for 2 weeks might thrill many people, but it terrified me. Not just because of the ever present fear of Getting Fat, but, actually, much much more because I need a way to burn off all of my excess nervous energy. I have been jittery with it the past few days.

I am simply not good at either being still or at being gentle with myself. Even when I did a ton of yoga, truth be told, it was an aggressive workout-style vinyasa and I often left before the end of shivasana. Sitting still with my thoughts – even worse, trying to not think – is not a strength. My few, feeble attempts at meditation has been torture for me for this reason.

I have rarely laughed as hard at a book (while simultaneously welling up with tears of sharp identification) as at the section in Eat, Pray, Love where Elizabeth Gilbert imagines the dialog between herself and her mind that goes on in the first 14 minutes of a 60 minute meditation. Of course being able to be physically still and being able to keep your mind still are two different things, but I would posit that the latter is truly impossible without the former.

So, of course I demonstrate how unevolved I am by going to get a shot in my knee so that I can go running again. But at least I’m thinking about it? Is that progress? I am not sure.

1 thought on “Cortisone and stillness”