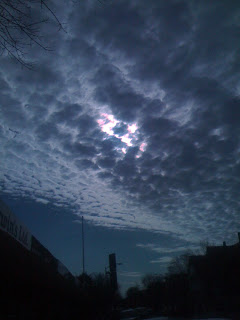 Another sun-through clouds photo, from this morning by Whit’s school. I read one of my favorite bloggers today writing about the process of her separation. She wrote so achingly beautifully about how wisdom comes at unexpected times, about the strange terrain she was walking. My favorite passage was when she told a story of someone asking her if she still loved her husband and she said of course. She said she did not un-love people. That is not her way. That her life would be easier if she could, in fact, un-love people. I know that feeling. It is not my way either, to un-love people. As I’ve said before, I am an open person and am blessed with many friends, but those who have burrowed all the way into my heart, who are the most deeply loved, are both few and permanent.

The post reminded me of a book I haven’t leafed through in a long time, The Book of Qualities. I’ve long adored this book and am so glad I opened it again this morning. The book is whimsical and wise, small and also enormous. A few of my favorite passages:

Courage
Courage has roots. She sleeps on a futon on the floor and lives close to the ground. Courage looks you straight int he eye. She is not impressed with powertrippers, and she knows first aid. Courage is not afraid to weep, and she is not afraid to pray, even when she is not sure who she is praying to. When she walks, it is clear that she had made the journey from loneliness to solitude. The people who told me she is stern were not lying; they just forgot to mention that she is kind.

Change
Change wears my sister’s moccasins. He stays up late and wakes up early. He likes to come up quietly and kiss me on the back of the neck when I am at my drawing table. He wants to amuse people and it hurts him when they yell at him. He is very musical, but sometimes you must listen for a long time before you hear the pattern in his music.

Ecstasy
Ecstasy builds slow fires, but they burn for a long time. His eyes are the color of the clear summer night. He loves the drum and the flute and the dark winter moon. He knows many things, but he does not talk much. If you try to pin him down, he will answer you with music. You have to decide for yourself what he really means….

Certainty
Sometimes all the Qualities seem to talk at once, and I don’t know who to listen to first. Certainty comes into the room and stands in the doorway and gives me a good long look until I hear the silence again … Certainty knows many alphabets. He is an architect with language. His words build meanings. He loves fine calligraphy and beautiful type. He once told me, “My love affair with language goes down to the letter.”

Panic
Panic has thick curly hair and large frightened eyes. She has worked on too many projects meeting other people’s deadlines. She thinks she has an incurable disease. No one else has been able to confirm or deny it. She wakes up in the middle of the night pulling her hair out. She wants to dig underneath her skin and pull this illness out by its roots. She grabs at her scalp instead. She is crying for help, but only when she is sure no one is around to hear her… Panic is sure no one can help her. She insists that she must sweat out these demons on her own. Although most people care about her, she refuses to see them. She is ignoring the evidence of her own senses.

Inspiration
Inspiration is disturbing. She does not believe in guarantees or insurance or strict schedules. She is not interested in how well you write your grant proposal or what you do for a living or why you are too busy to see her. She will be there when you need her but you have to take it on trust. Surrender. She knows when you need her better than you do.

Honesty
Honesty is the most vulnerable man I have ever met. He is simple and loving. He lives in a small town on a cliff near the beach. I had forgotten how many stars there are in the midnight sky until I spent a week with him at his house by the sea. In my time I have been afraid of many things, most especially of the heights and of the darkness. I know if I had been driving anywhere else, the road would have terrified me. Knowing I was on my way to see him softened the fear. And in his presence the darkness becomes big and deep and comforting. He says if you are totally vulnerable you cannot be hurt.

Wisdom
Wisdom has a quiet mind. She likes to think about the edges where things spill into each other and become their opposites. She knows how to look at things inside and out. Sometimes her eyes go out to the thing she is looking at, and sometimes the thing she is looking at enters through her eyes. Questions of time, depth, and balance interest her. She is not looking for answers.