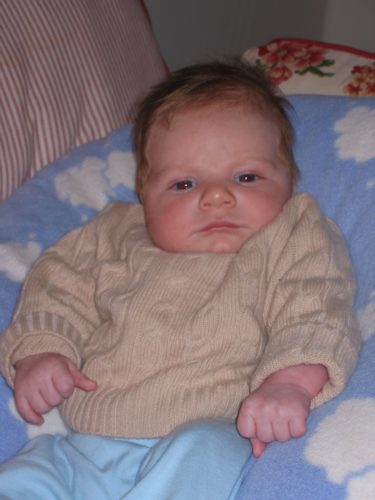 One of my favorite pictures of you.  Six weeks old.

On Sunday you turned fourteen.  Fourteen!  I know I’m not the only parent out there who looks at their young adult children with shock and awe.  The truth is I’ve always felt wonder when I look at and consider you.  You surprised me in so many ways when you arrived – your incredibly speedy birth after your sister’s lengthy and protracted one, the fact that you were a boy, your blond hair, your blue eyes.  As you grew into a toddler, boy, and now, young man, you made me feel a lot of things but chief among them, when I really think about it, is wonder.

You amaze me. You did on the day you were born, on the eve of a huge snowstorm, and you still do.

First and foremost, you are funny.  Dad and I aren’t that funny, so we are both surprised by and thankful for this trait in you.  You keep our family laughing.  And you know better than almost anyone how crucial that has been in the last year and change.  In December you made me laugh almost as hard as I’ve ever laughed with an answer in the Game of Things.  You exhibit the kind of humor that demonstrates that you are listening, and paying attention, and remembering.

I’ve long held that truly funny people are also really smart.  Substantive comedy exists only with commensurate intelligence.  My favorite example for this fact has always been Steve Martin, but I think going forward it is going to be Whit Russell.  I’ve described you before as the sparkle in our family, and you are. In the summer, when you’re at camp, we are all a little muted without your energy, and, yes, your sparkle.

I do, sometimes, worry about the flip side of the sparkle.  I don’t want you to feel like you have to be funny all the time. You’re keenly aware of everything and everyone around you; your sensitivity, while less apparent on first blush, is also a strand that is woven into your humor.  This is, suffice it to say, a familiar trait.  I think you’re an empath.  I just want you to know you don’t always have to be cheering everyone up.  You are allowed to feel things – which I know you do – to the degree that sometimes you feel less sparkly.  We won’t love you less!

What I want to do with these words is to capture you in flight.

You are in midair between childhood and young adulthood.  You are still a boy but I can see the man you’ll be in your face.  Your braces came off and you are growing rapidly.  You wear a tie every day and are so comfortable with it that often you don’t take it off until bed.  You have a few very dear friends, most of all your camp friends, with whom you are in daily contact.  You love camp with the same ferocious loyalty as I did, and I adore seeing that.

Last year was a year of tumultuous change for our whole family, and you personally went through some major transitions.  You left the school you had been at since you were four to go to a new school, surrounded by new people, you took up a new language (Latin), you took up two new sports (squash and crew), you dropped a sport you’ve been playing since you were seven (hockey), and you lost two grandfathers.

With a few exceptions – you get cranky like the rest of us – you surfed the waves of last year like a pro. Your resilience inspires me and your ability to see the humor in dark situations lightens things on a regular basis.  You are adaptable and have learned to roll with the punches in a way that I am certain will stand you in good stead in life.  When you were too small to row with the rest of the middle schoolers last year, you tried coxing, and while you grumbled about it at first, you found you liked it.  You made the best of it, and learned something about yourself in the process (a headband with a microphone: awesome).

I adore you, Whit, and I have since you arrived that day, peaceful, blond, blue-eyed.  You’re still all of those things, and the peaceful is now interspersed with humor and wisdom in equal measure.  I’ll floss for you anytime.