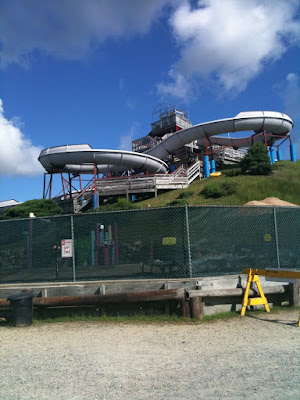 Annual trip to Water Wizz this morning. Grace, Whit and I were, as usual, about 15 minutes early. So we sat in the car, with the heat on. Note: summer vacation in September has some drawbacks. Especially at a water park. We met Clem, Campbell, and their father for some sliding fun. First up was the Lazy River which entails drifting around a circuitous circle, being occasionally drenched with waterfalls. Sounds great except it was freezing cold. Literally my teeth were chattering. Next up was the slide you see above. All four kids (ages 7, 6, 5, and 4) went down it. I had to go first, and Whit was right behind me. He came down backwards and flipped upside down in the landing pool. His face when he came up was absolutely priceless. Unsurprisingly, this first slide was his last of the day.

Clem shared Whit’s dislike of the slides, so the three of us took the mellower route. We were playing at Pirate Cove (basically a foot of ice cold water and a pirate-themed jungle gym, with occasional waterfalls – sense a theme here?) when Whit wiped out and skinned the bejeezus out of his elbow. He fell in Vermont, too, successfully completing a five-point skin: literally, both elbows, both knees, and his forehead. I didn’t see the fall but I can only imagine he took flight like Superman before coming abruptly back to earth. Anyway, today’s skin was a knee and an elbow and he was bleeding enough that they rushed me to the First Aid shack.

A couple of huge band-aids and we were back in business. By noon everybody was freezing cold and whiny and outright exhausted. I took Grace and Whit home for macaroni and cheese. Things went steeply downhill here. They were bickering over the screen door, with Whit wanting it wide open and Grace upset by this because it made the hummingbird feeder drip. There were raised voices, okay, fine, including mine. Then they were arguing over the macaroni and cheese box. Grace would not let Whit hold it. Which is, apparently, an offense worth biting over.

Which he did. I was at the stove when I heard Grace’s blood-curdling scream. I turned and she was wailing, “Whit bit me!” with a thorougly appropriate mix of indignation and horror. Whit saw my face and immediately started muttering, “I’m sorry, Mummy, I’m sorry!” I dealt with him in no uncertain terms and pretty soon all three of us were crying. I asked Whit to apologize to Grace, and he did, and she made me cry tears of pride over those of frustration and exhaustion when she said, totally sincerely, “I accept your apology, Whitty.” After a speedy lunch everybody went to their rooms for rest and screens of all kinds (computer, DVD player, old iphone).

The afternoon was mellow and we had dinner with the friends of Water Wizz (and last night) at a great old-fashioned pizza parlor in Onset. The food was great and the children had fun playing with the video games and pinball machines. There was ice cream afterwards and then it was home for early to bed. Grace was tired as I read to her and, as it had all afternoon and evening, her mood oscillated between surly sass and breakthrough tears.

I finally tucked her into bed, curling up next to her. I brushed her hair back from her forehead and whispered to her about how I loved her no matter what. I apologized for raising my voice and explained that I always loved her, even when I was disappointed with or upset at her behavior. I told her that the thing she did that made me proudest all day long was not going down the crazy black-diamond waterslides (my GOD my child is fearless, in a way I can tell is going to be bad news) but accepting Whit’s apology after he bit her.

I could feel her body relaxing next to me, watch her eyelids growing heavy. She murmured, so quietly I could barely hear her, “Mummy, I feel like I could snuggle with you forever.” My heart ached as tide of tenderness came in to wash out all of the yelling and anger and oh-my-God-I-suck-at-this emotion of the day. It always seems to do that, no matter how rough the day has been. Every day like this I doubt everything about them and myself as a parent, and then it comes, that overwhelming splash of emotion, both fierce and gentle, humbling, inspiring, and comforting me all at once.